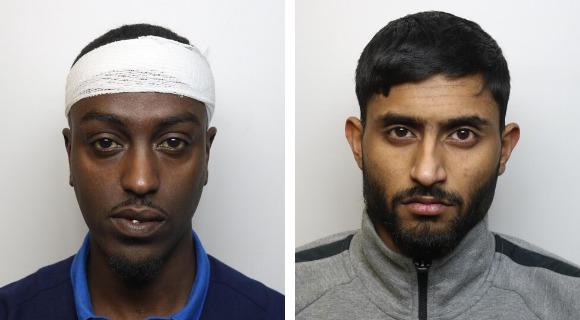 Two leaders of a Swindon drugs gang, who are now on the run, have received a collective jail sentence of over 13 years for distributing between £95,450 – £100,000 of crack cocaine and heroin. Ali Dini and Jenner Araujo had to be sentenced in their absence at Swindon Crown Court as authorities have no idea where they currently are.

Dini, now 35, peddled heroin and crack cocaine in Swindon for over 14 months between February 2016 and March 2017.

Araujo, now 24, was 20 at the time of the offences. He was arrested on Gladstone Street in March 2016 with heroin, £200 cash and two mobile phones. He had hidden more wraps of heroin and crack cocaine nearby.

Their county lines-style operation saw drugs being brought from London and sold in Wiltshire. The gang sent out bulk texts to drug users, and used a Whitney Street address as a base from which to sell drugs. They employed at least one child runner.

Three other men have already been prosecuted for their involvement:

Reagan Pires was the first to be arrested. He was stopped in early February 2016 in an alleyway near York Road, Swindon, carrying eight packages of heroin and eight of crack cocaine, along with two phones and £300 cash. He was jailed for three years and four months.

Saedul Ali, then 15, and Mohamed Abdi-Hassan, were arrested in 2016 when police found them with drugs and cash. Ali, who has since turned 18, was sentenced at the youth court.

Abdi-Hassan was jailed for three years and 10 months.

Dini’s DNA was found on drug wraps sold by others lower down the chain; he has also been found guilty of a case of common assault in December of 2018. He pleaded guilty to conspiracy to supply class A drugs, common assault and criminal damage.

Araujo denied the conspiracy but was found guilty at trial.

At sentencing, Judge Jason Taylor QC said that Dini  “was directing, organising, buying and selling on what I consider cumulatively to be a commercial scale.”

As the leaders of this Swindon drugs gang are still on the run, warrants were issued for Araujo and Dini’s arrests last summer.