Plaques unveiled in Portsmouth to coincide with VJ Day 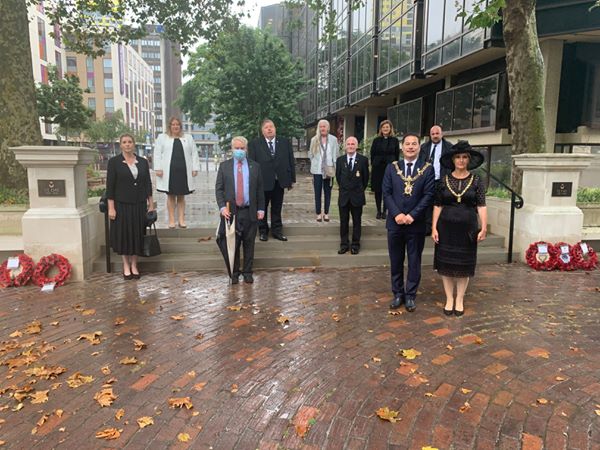 Plaques unveiled in Portsmouth to coincide with VJ Day

New plaques marking the 75th anniversaries of VE Day and VJ Day are on view to the public in Portsmouth today (Saturday).

The unveiling was held yesterday to ensure the plaques would be seen today, VJ Day, which marks the surrender of Japan and the end of the Second World War.

They were unveiled by the Lord Mayor of Portsmouth, Cllr Rob Wood, and the Leader of Portsmouth City Council, Cllr Gerald Vernon-Jackson.

The unveiling came during a ceremony led by the Rev Tracey Ansell, Chaplain to the City Council, and attended by members of the Portsmouth South branch of the Royal British Legion and civic leaders, at the recently-completed remembrance area next to Guildhall Square.

Rev Ansell said: “May all who look at these plaques reflect on the price that was paid and the decisions that needed to be taken to bring freedom and peace to our land. May we never be left wondering what humanity is capable of doing to one another.

“We salute the bravery and courage of so many women and men, serving in the forces and in civvy street so that we can stand here today, giving thanks and promising that we will never forget.”

Cllr Vernon-Jackson said: “Although commemoration of this important anniversary of VJ Day has had to be curtailed around the world, we can still mark this poignant event and create something special to mark the occasion.

“Both these plaques record landmark events in the history of our country and of our city, with its special connection to the Royal Navy and our other armed forces.