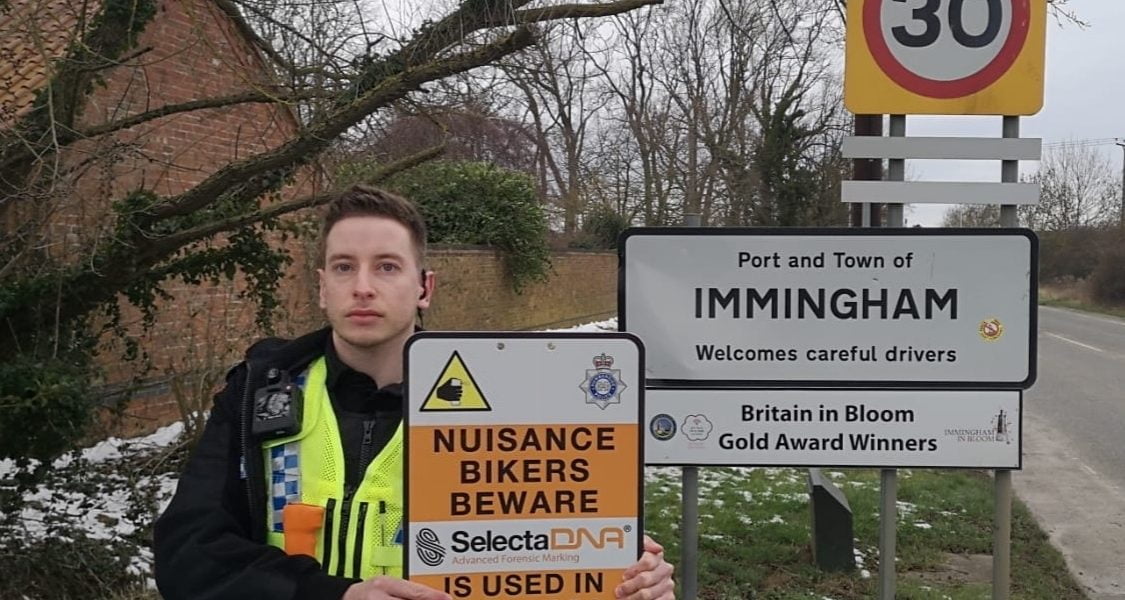 Humberside Police have announced a new scheme whereby nuisance motorcyclists will be sprayed with a DNA spray as they pass police officers.

The state of art spray kit will aid officers attempting to identify offenders by marking suspects with a solution of unique DNA code and UV marker.

The substance is invisible to the naked eye and almost impossible to remove.

It is also easily identifiable under UV light, and irrefutably links offenders with offences.

“This is another really good example of work we are doing to reduce the number of motorbikes, mopeds and quad bikes ridden unlawfully in our area.

“Having spoken to so many of our local residents through Humbertalking we know it’s an area that really concerns them and we are committed to tackling this issue.

“Introducing this new technology will contribute to reducing anti-social behaviour and criminal activity and will, most importantly, reduce the nuisance caused to our communities.

“One of the key roles of our local Neighbourhood Policing Teams is to be out and about in their communities and support those riding their motorbikes and mopeds in accordance with the law.

“We also want to help them to protect their bike from those involved in crime. If you have a motorbike or moped we would encourage you to invest in a good quality lock and always ensure your motorbike is out of public view and securely locked away.

“This DNA spray is just one more step in tackling the crime and antisocial behaviour caused by nuisance motorcycles and continue to look at new innovations and ways in which to reduce the impact of anti-social riding of motor cycles.

“This surrender was a seven-day trial and a small number of bikes were handed in.  It does show however that there is a need for these unwanted bikes to be taken off the road.

“These bikes are safely destroyed they are no longer at risk of being used in crime or antisocial behaviour and we will continue to work with our colleagues at North East Lincolnshire Council to look at how this can best be achieved.”

Just last week, Cleethorpes residents took to social media to express their concerns over nuisance motorcyclists and boy racers in the area.

They branded the situation “a nightmare,” and called on the authorities to take action.

Numerous police reports were logged and several people were cautioned.