Manager has praised security dog handler Martin Lewis and his security dog ‘Duty’ for going above and beyond in the community.

SDH Lewis with SD Duty were flagged down by a distressed female whilst on patrol in the North Lincs area at 22.30hrs on 18th February .

A stranger who a local resident had been speaking to on the Internet appeared at her address and then refused to exit her vehicle.

She was safe guarded and the male party removed from her vehicle without incident. Police called and the incident was handed over to them safely. 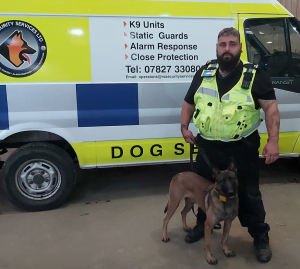 RS Security Services Ltd was set up in 2016 by Richard Short.

Richard, managing director said ‘The security sector is often overlooked, it’s not just people walking with a flashlight, it’s so much more than that.’People don’t realise we all have a civic duty to make the world a better place. And what Martin has done is just that.

‘He has gone above and beyond. He stepped in what would be a police officers role and took a risk until the police arrived on scene.

‘It’s not the first time Martin has gone above and beyond in the workplace. We will be presenting him with a certificate and voucher for his excellent work.

‘We must also praise security dog S.D.Duty taking the leash for the night protecting those who entrust us.’ 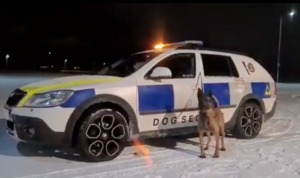