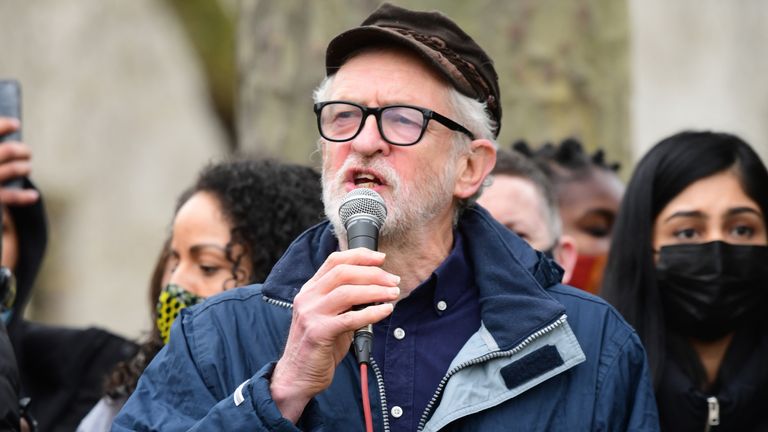 The former Labour party leader Jeremy Corbyn urged marchers to “stand up for the right to protest”, as protests against the controversial Police and Crime Bill were held up and down the country on Saturday.

‘Kill the Bill’ demonstrations have taken place in London, Birmingham, Manchester, Bristol, Liverpool and Newcastle, among other places.

“I want a society where it is safe to walk the streets, where you can speak out, you can demonstrate and you don’t have to seek the permission from the police or the home secretary to do so.”

He referenced figures including Nelson Mandela and the suffragettes as he encouraged the crowd to oppose the bill.

Corbyn said the protests against the bill began after police dispersed the crowd at the “perfectly correct and proper vigil” for Sarah Everard, who was kidnapped and murdered by a Metropolitan Police officer as she walked home in south London.

The Police, Crime, Sentencing and Courts Bill give police in England and Wales more power to restrict and impose conditions on non-violent protests.

Anyone who refuses to follow police directions during a protest could be fined up to £2,500.

Police have confirmed that 26 people were arrested after a minority refused to leave after the London protest.

Several ministers and police have defended the bill, claiming that it was needed to tackle demonstrations in the midst of the Covid-19 national lockdown.

View scenes of the Saturday protests below:

'Kill the Bill' out in force in Manchester. Massive numbers. Great scenes. 🔥pic.twitter.com/Zbqe1XUCPd

'Kill the Bill' protests in London today, against the Police, Crime, Sentencing and Courts Bill which would broaden police powers when handling protests #killthebill #londonprotest pic.twitter.com/COsGflFipJ

That’s the chant from protestors as they make their way along The Headrow in Leeds city centre #KillTheBill pic.twitter.com/CUsVvBKtMX

Earlier Kill the Bill protests took place during lockdown, but the ones on Saturday are the first since Covid-19 restrictions were eased.

The new rules allow people to meet outdoors in groups of six or two households.

As long as protest organisers carry out a risk assessment and take all reasonable steps to limit the spread of Coronavirus, there is extra provision to allow outdoor protests with more than six people.