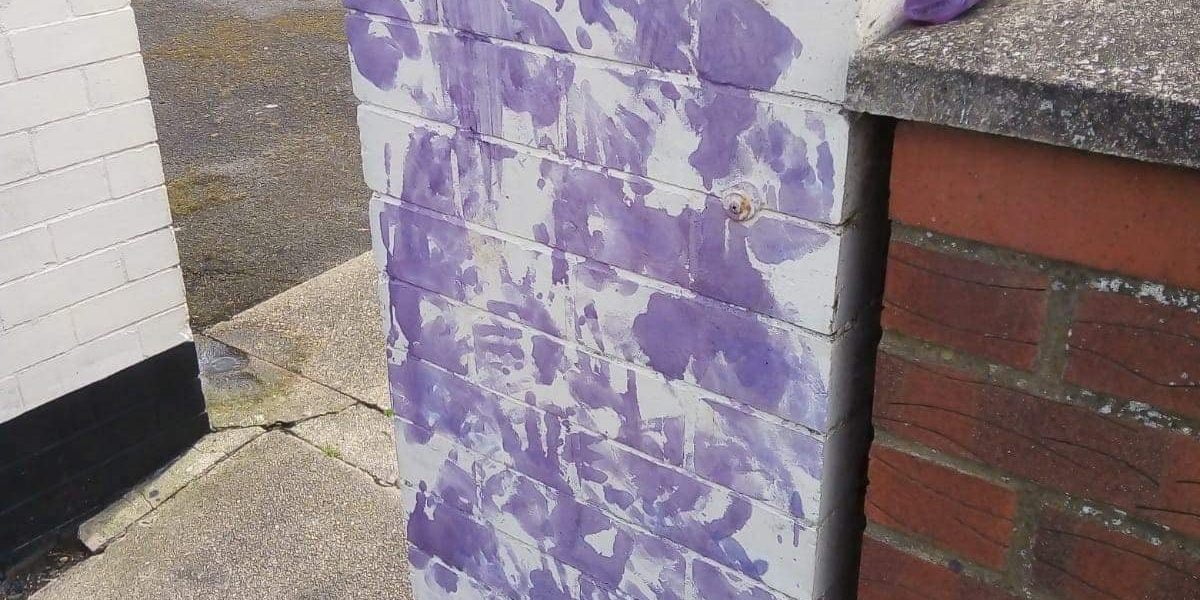 A Cleethorpes woman has expressed her anger after pictures emerged on social media of vandalism to a wall outside Carr Lane Social Club.

When Kimi Jayne Mawer saw the pictures of the damage done – along with a photo taken of the back of her daughter’s head as she walked away – she was horrified.

Posted to the DN35 Crimewatch page, the pictures show the wall covered in bright purple handprints and the two teenage girls in the distance who are believed to be responsible.

The caption reads: “Anyone know the two girls who thought it was okay to paint the club’s posts on Carr Lane today? If your daughter has purple hands or clothes, you need to send her down to offer to repaint them.”

In response, Kimi commented on the post to express her horror, and said she plans to send her daughter to the site to clean the mess.

She wrote: “My daughter will be there later scrubbing at the wall and if not, she’ll be painting it at the weekend. Honestly I am so ashamed… I never thought in a million years something like this would cross her mind, never mind actually doing it!”

A number of people then praised Kimi for her honesty, with one person commenting: “Well done for posting on here. It must have taken some courage. Great parenting, you may feel ashamed just now, but you can be proud of your actions. Your daughter should be proud that she has grounded parents, once she gets over her own shame.”

Kimi told Gi Media: “I was 90 percent sure it was her and I can remember walking into the bathroom after she got home last night and seeing a purple-stained sink. I didn’t think anything of it at the time.

“I questioned her this morning about the purple sink and she said ‘I got ink on my hands’, but I rang her dad and sent him the post and told him about it.

“He rang her and asked her straight and she admitted it,” said Kimi.

The 13-year-old then told her dad how the vandalism was carried out by herself and a friend using a mixture of ink and hand cream.

Kimi continued: “She doesn’t know why she did it and she regretted it straight away. She agrees that she needs to correct the wall and be punished.

“She’s a great girl who is in the top sets at school getting top marks. I do believe it was just a moment of madness with no thought behind it, although that doesn’t change the fact that she actually did do it.”

Kimi said her child’s dad contacted the school to inform them, and that she contacted Carr Lane Social Club to express her apologies.

“She will be scrubbing or painting the wall to put it right. I was reading through some of the comments on the post and got quite upset with some of them.

“I just had to comment and put my hands up and say ‘It’s my daughter’, but that her ways would be corrected.”