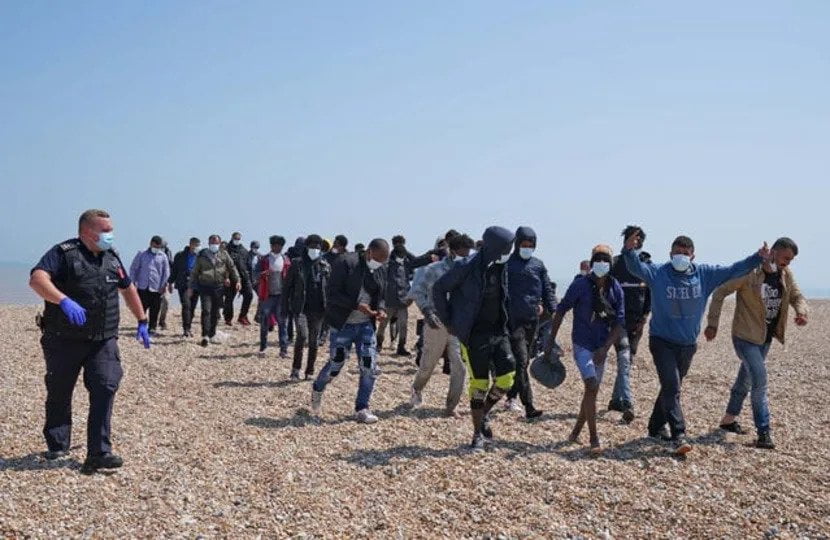 France will receive £54 million from the government to try and stem the flow of migrants crossing the English Channel and landing on England’s east coast.

The number of people making the crossing in recent days has been rising due to the warm weather and calm sea conditions.

As of Tuesday, the number of people who have made the dangerous journey across the channel this year passed the total for all of 2020, with at least 287 migrants succeeded in reaching the UK,  despite there being more than 5 months left of 2021.

The total for this year is now at least 8,452, according to available official data compiled by the PA news agency, while the figure for the whole of 2020 was 8,417 people.

These figures are based on Home Office data obtained and analysed by PA.

While on Monday, at least 430 people, including women and young children reached the UK, a new record for a single day.

Home Secretary Priti Patel and French Interior Minister Gerald Darmanin agreed on the deal which would use the money to more than double the number of police patrolling French beaches across the northern coast between Boulogne and Dunkirk.

Patrols will also be expanded further north-west around Dieppe.

There is also to be improved coverage via surveillance technology of the coast of France and investment in infrastructure is to increase to try and bolster border security at key border crossing points along the Channel coast.

This is the second time in less than a year that the UK has pledged money to France to try and prevent illegal migration.

Ms Patel said that British people have “had enough of illegal migration and the exploitation of migrants by criminal gangs”.

Mr O’Mahoney said: “There is an unacceptable rise in dangerous small boat crossings across the channel because of a surge in illegal migration across Europe.

“Today we signed a strengthened agreement with our French counterparts to increase police patrols on French beaches and enhance intelligence sharing.

A number of boats reached the UK on Tuesday and many were brought to the beach aboard an RNLI lifeboat, where they were met by immigration officials.

“Priti Patel can re-announce enhanced police cooperation with the French all day, every day, but until there is a political renegotiation to allow refugees safe passage to claim asylum at the UK border in France, this relatively small number of desperate people will continue risking everything for a shot at our protection.

“Ministers should stop playing fantasy politics and step up to protect lives instead.”

Thousands of migrants have packed aboard often unseaworthy dinghies and continued to make the trip across the Channel, putting their lives at risk on one of the world’s busiest shipping lanes over the last 18 months,

In October last year, a Kurdish-Iranian family, including small children, died when their migrant boat sank off the French coast.

Steve Valdez-Symonds, refugee and migrant rights programme director at Amnesty International UK, said the Bill will only serve to exacerbate the asylum issue.

He said: “There are important measures in this Bill to right historical injustices in British nationality law, but sadly its totality is such an abomination that it is almost beyond repair.

“Criminalising people just for trying to reach a place of safety is morally and legally indefensible.

“People cross the Channel and put themselves in serious danger because there are simply no safe alternatives open to them.

“Unless MPs drastically amend this Bill, we will end up with even more chaos and delay in our dysfunctional immigration system.”