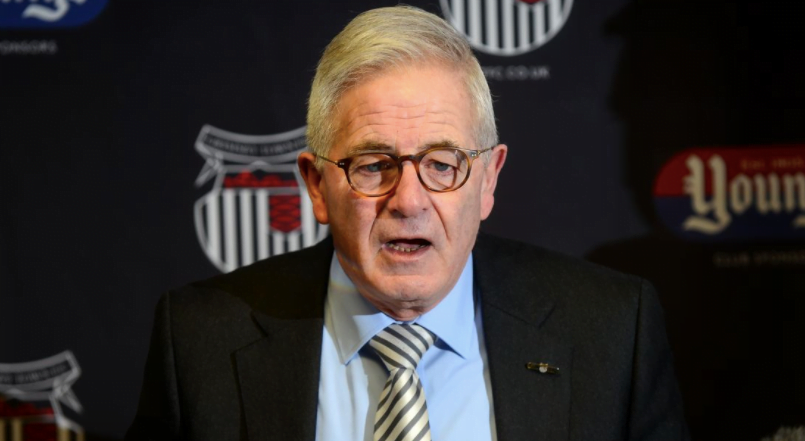 Ahead of Grimsby Town FC’s expected takeover tomorrow, chairman Philip Day has issued a full statement to apologise for the club’s relegation to non-league.

In his statement, Mr Day addressed a number of issues that have come to light during the season, such as the departure of assistant manager Anthony Limbrick, Ian Holloway’s transfer, and the use of Covid clauses in players’ contracts.

“We deeply regret that the Club has been relegated from the EFL and unreservedly apologise for our part in that. There is no doubt that this has been a difficult year both on and off the field.

“Before the season we did not know whether supporters would be allowed into the ground during the season, what arrangements could be made for matches to be shown on iFollow and what, if any, rescue package would be available from the EFL. There was uncertainty over what level of usual payments would be available from the EFL which were dependent on what television monies it received and at the time a potential clawback from Sky. There was no certainty of how long Government support would be available. Directors have a fiduciary liability to ensure that a company does not trade insolvent and with no guaranteed income but known liabilities, difficult decisions had to be made.

“Notwithstanding this we did ensure that the manager had the budget he required to build a squad. The decision of who to release and who to sign as players is, and always has been, the decision of the manager. Likewise, when Paul Hurst was appointed he was told that whatever funds he required to change personnel were available even if this meant paying a penalty for exceeding the then in force salary cap regulations. As it transpires our playing budget is the twelfth highest in League 2.

“We have been criticised for using Covid clauses in players’ contracts. Again, to consider this it is necessary to go back to last summer. At a meeting of EFL League 2 clubs, it was agreed that such a clause was necessary, and it was drafted by the EFL. We are not the only club who utilised this and are aware of clubs in the top six of the League who also did so. The decision must be seen in the light of the circumstances pertaining at the time referred to in the previous paragraph.

“Another criticism of the Board was that to dispense with the services of Anthony Limbrick two days before the start of the season. This decision was taken at the request of the manager who decided that he did not wish to continue with Anthony as his assistant or with any other assistant and was content to utilise Ben Davies as first-team coach. In the same way, the decision on the number of pre-season games to play was that of the manager. In hindsight, we should have perhaps challenged these decisions more robustly.

“It became apparent early in the season that player recruitment was an issue. To that end and in anticipation of the next transfer window we agreed with a request from the then manager to appoint a new member of staff responsible for player recruitment to enable the squad to be strengthened. That person stayed in post until the current manager was appointed.

“We have had to grapple with financial survival all season. We had in the previous season decided to purchase a computerised ticket system which also incorporated a customer relationship package and electronic admission at the turnstiles. Notwithstanding the financial pressures, we decided to continue with this in the hope that fans would be back sometime in the season. That almost happened in December. Prior to the season starting, we purchased a new state-of-the-art GPS fitness monitoring equipment for the players. Further works were carried out at Blundell Park and we thank the many volunteers who helped with this.

“We have paid all of our VAT, PAYE and NI and are completely up to date with these payments. We have not applied for any EFL loan monies. This is in contrast to many League 2 clubs who have deferred the tax payments and others who in addition have had to take up loans. We will complete the financial year with a healthy bank balance to cover expenditure over the summer and to start rebuilding the squad. We will also have the benefit of the parachute payment to assist in this.

“Having grappled with all of these issues over the past twelve months we can only again apologise for the relegation. We started the season with the highest hopes with an experienced manager whose appointment was universally approved. Sadly, our hopes and wishes for a successful season have not materialised.

“We would, again, like to thank our fans for their support both financially and otherwise and help during this most difficult season. We are truly fortunate in having such a loyal and supportive fan base. In addition, we thank our sponsors Youngs and the many local businesses who have continued with their support even though they have not been able to attend games. All of this is truly appreciated.

“If on the 5th May the two resolutions are approved by shareholders, then Jason and Andrew through their company 1878 Partners Limited will become controlling shareholders. We could not wish for better people to take the Club forward they both being lifelong supporters. We wish them well in all they do. As fans, we will be with them all the way on their journey.”

The results on the vote to turn the club into a private company are expected to be revealed to the public tomorrow.